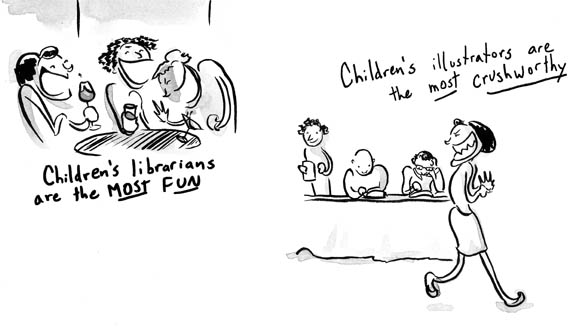 On children’s librarians:  I’m sorry, it’s true.  I don’t think any profession is, as a whole, so much fun.  I have been a children’s librarian for about five years now, and they are nearly as much fun as the folks I worked with at Borders in 1999.  We had more weed, more black box theater, but let me tell you: children’s librarians can drink.  Within hours of my arrival in Atlanta, I’d been swept up into a crowd of old friends, and yes we did talk about work all night.  Just because we drink and are fun doesn’t mean we don’t geek out.

A couple years ago I got to go to dinner with children’s author and illustrator Rosemary Wells.  Rosemary writes the sweet, wonderful “Max and Ruby” series.  Two little bunnies with their own picture books, and Max is often in overalls and covered with sticky sugar.  Some colleagues and I took Rosemary and her agent, Rosie, to Kuleto’s in downtown San Francisco.  They insisted on wine and cocktails for the table.  After that it’s all kind of a blur.  I remember Rosie going on a rant about rhubarb.

I went running twice in Atlanta.  The entire city is kind of a forest.  The Emory campus in particular is covered with trees, and there’s an actual little wood in the center, with a pond that looked all too inviting in the southern humidity.  I jogged around it once, got a little lost in the woods, took pictures of an old railroad and a train going slow.  It was all the exercise I accomplished the entire week.

One thought on “Atlanta”